Once upon a time, there was a fair maiden. Our heroine lived a strong and true life. When it became time, she gracefully accepted the role of adulthood and accepted her responsibilities to the King and Queen before her, opening her home and assisting them in the search for a new castle.

Unfortunately, our heroin was plagued by one remaining member of the Queen's court - the royal mongrel. While very cute and worthy of her own tiara (at least in her mind) this canine court jester was severely lacking in courtly manners. This pampered princess would loudly state her displeasure over every other animal subject. One glance, one sound from any other feline, canine, or even the young master or mistress of the castle would set this beast into piercingly loud protest. Not only were her protests vocal in nature, there were also the physical 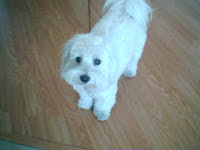 ones. Although this did not occur in our heroine's castle, in previous royal establishments, the unfairest of them all would leave a smelly majestic offering as proof of her displeasure.

As all fairy tales do, ours too, has a happy ending. After three days of furry dissension our heroine's nemesis was relocated to the C Bar C Doggie Dude Ranch for the remainder of the royal visit.

And peace reigned in the land.
Posted by Liz at 8:28 AM

Oh, I thought I was going to pee my pants reading today's blog!