I was mostly right. I got there after him, so I chose not to sit by him. He was expecting me too, I could tell since he left me room to sit right next to him. He wore the tie that he wore when we were married. I found that strange. (And yes, he knew it).

The judge called us up, asked me a bunch of questions, seemed to really like my answers, and then asked him "with the exception of the pregnant question, do you agree with the answers given?" - He stammered out his "yes", but I got the feeling he was hoping for an opportunity to argue. He wasn't given one.

The papers were signed, filed, and copies were handed to us.

We left the courtroom to talk about some kid scheduling stuff, and yep, he asked for more money. I refused.

I left and went off for a lovely night with a terrific man.
Posted by Liz at 7:59 AM 2 comments:

I'm leaving in 12 minutes. I will drive with the sunroof open, windows down, and music blaring. I will arrive at the courthouse in about 20 minutes. I will be checked by security, I will walkthrough and I will find the courtroom and sit and wait.

I will remain calm and collected. (Or at least I will look that way).

'Twas the night before...

Remember when you were a kid and when it finally seemed like Christmas was around the corner - you really *had* to be good in order to make sure Santa would come?

That's kind of what I'm feeling these days. My hearing to finalize my divorce is finally, FINALLY almost here. Two more days. (Ok, 48 hours, 49 minutes, but who's counting?)

I am trying so hard to be good, Santa. Not for more presents, just so things go smoothly. T is pushing those buttons hard, but luckily, I've got D on my side, keeping me calm, and reminding me not to do anything foolish this close to the big day.
Posted by Liz at 3:10 PM 3 comments:

Last night, D and I took S & A to watch a basketball game. It was D's little brother playing - and this game was the final in the tournament.

Of course the right team won.

However, I saw a glimpse of the future. S was too cool to sit with us in the stands. He hung out with his friends. He's now 7. I thought I'd still be cool for a few more years.

So, when we last left our heroine, she was holding the wrong cake and being denied access to host her party.

The proper phone calls were made, and the gates were lifted and I was able to come in. Now according to the YMCA webpage - you get one hour of climbing fun and then another hour in the "new party room". Ok, I'm fighting the urge to make air quotes even as I type this. I don't think that title worked - on any level. New - nope - same ol' space that's been around as long as I've been coming to the Y - dingy, dirty, etc. Party - wouldn't that indicate to you that they might have done something to make it look festive? Nope. No decorations, no table clothes, just folded tables and chairs along the walls for me to set up. Room - doesn't a room have to have four walls? This was really an "old, dingy, space you can use to put your crap on a dirty table so it doesn't have to sit on the floor". Ah... truth in advertising.

The kids didn't care - they ran around as more and more of them arrived and were dropped off by their parents.

As of 10:15, I had a "room" full of hyper party-animals, but no rock climbing wall instructor. She did show up eventually, and made her presence known a little later ("Oh, I was over there...") and I herded the children toward the rock climbing wall. Not all kids climbed, but all ran around - played, and had a good time, generally speaking.

Around 11:15 - we lit the candles, sang, and dug into the gooiest frosted cup-cake cake. Again, the kids didn't care - they had a great time. By the time the cake was served up, my dad was back from my house with the cups that I had left behind. (Hey, I remembered to bring milk and punch - couldn't they just swig from the bottle?)

Again, in the long run - the kids had fun, everyone made it through safely, there are some cute pictures, and my son got tons of goodies.

What more could a kid want? It was the bells and whistles that I wanted that were missing.

Oh, and as to the family participants? Not too bad - a little chilly, but I'll save those stories for another day.
Posted by Liz at 7:59 AM 2 comments:

I figured out what to do for S's birthday party a few weeks ago. This was brilliant! I wanted him to have a great birthday, but knowing that the ex-husband, ex-in-laws, parents, and SO were all to be in the same place at the same time, I wanted something in a more nuetral territory.

The brilliant plan was to do a party at the YMCA - it would start at 10:00 - and the kids would get an hour on the rock climbing wall. At 11:00 we would do cake and presents, and at 12:00, those that were interested could watch S and A play their last basketball game of the season.

This kept the party out of my house, left the decorating and clean-up to someone else, as well as giving the kids something fun and different to do.

The invitations went out about two weeks before the party, requesting an RSVP date by March 1. Apparently - this date was a figment of my imagination. I waited until March 3rd, before ordering the cake and thinking I had the final number of party guests. Ha - silly me! Would you, my dear readers, like to know when I received the last RSVP? AFTER the party. No, you read that correctly. I was at the basketball game and listened to my voicemail - and there it was - the last RSVP for the party - ok, granted it had come in about 15 minutes before the party started, I just didn't hear it until afterwards, but seriously... come on parents!!!

So, as you know, my parents were also in town, and staying with me. We'd been having a nice visit, S and A were loving spending their time with their grandparents, D survived the meeting of the parents, etc., etc., etc.

Friday night before the party, I was supposed to meet my parents and the kids for dinner, while D drove a couple of hours to pick up his daughter (little d). Unfortunately, D had a long day and work, and as a result, some flash burn in his eyes, making it a little scary (ok, totally nerve wracking for me) for him to drive, so my parents watched two of the munchkins, and D and I went to pick up d. Round trip takes about 4.25 hours - so by the time we got back - we were all pooped. No worries, I'll get the party ready in the morning.

I got the goody-bags done, got most of the stuff I needed for the party (got that part... *most* of the stuff) and my mom and I set out to get set-up at the Y.

Problem 1: The cake was done wrong. The cake, which was a cupcake-cake was made with chocolate frosting, even though it specifically said "white frosting" on the order form. My son doesn't like chocolate. A quick fix - we added 12 white cupcakes around the edge of the cake - so that S could still enjoy his birthday cake. 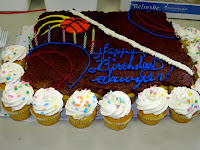 Problem 2: The YMCA had no record of me booking a party. I got there about 9:40 - and nope, no party scheduled. The woman running the back building (hosts gymnastics and the rock wall wouldn't even let me *in* to set up, because she had no record of the party. Parents were starting to show up, and I couldn't even bring in the wrong cake.

Ok, more details to come - don't worry, in the end everything worked out fine... but it makes a better story to bitch about it.
Posted by Liz at 9:14 AM 1 comment: